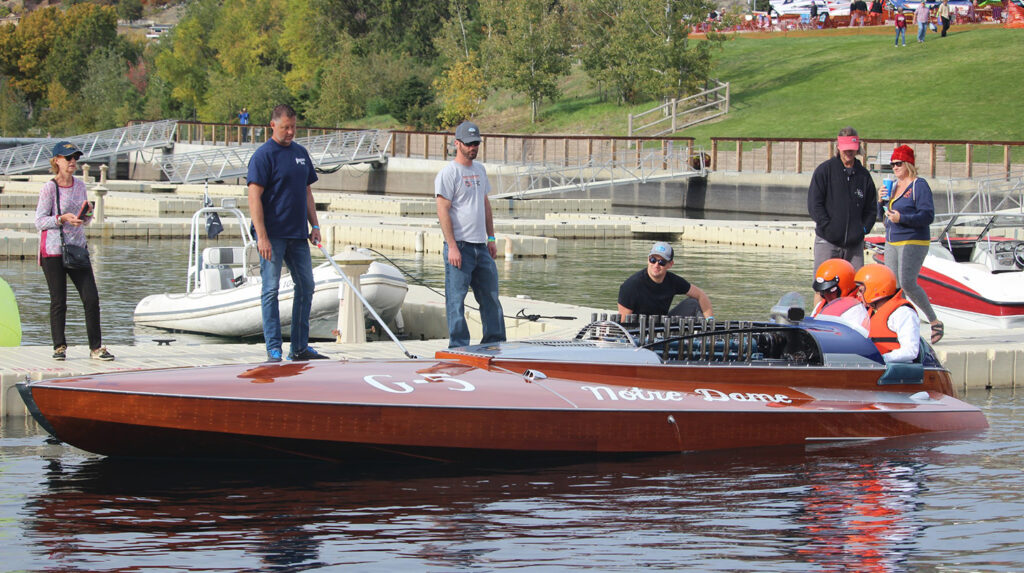 In this photo, Dan Arena is in the left seat in the cockpit, Danny Foster is in the right seat.  They are preparing to take the boat out on Lake Chelan during Mahogany and Merlot in 2019.

Story and photos by Craig Fjarlie

In 1940, Notre Dame, the third craft to carry that name, won the President’s Cup in Washington, D.C. The boat was driven by its builder, Dan Arena, and was powered by a 24-cylinder Duesenberg engine. The 1940 boat was a successor to the namesake that won the APBA Gold Cup in 1937. The same engine was used in both boats.

The Notre Dame legacy began in 1935. Owner Herb Mendelson named the boat after his alma mater. He purchased the Duesenberg engine from Horace Dodge. Designer of the boat was Clell Perry, who also was the driver. The original Notre Dame has been described as “unusual looking” with the cockpit amidships.

A second Notre Dame was built by Perry for the 1938 season, but the boat flipped just before the Gold Cup and Perry was seriously injured. Notre Dame was back on the water in 1939, this time with Dan Arena as the driver. His nephew, also named Dan Arena, recalls his uncle describing the second Notre Dame as a terrible boat to drive. Mendelson ordered a new boat for the 1940 season, to be built by Arena. Three-point hulls appeared to be the wave of the future, but Mendelson insisted on a step hull.

Arena and Danny Foster, both from Oakland, California, had built a boat named Miss Golden Gate and took it to Detroit for the 1938 Gold Cup race. They garnered second place, which impressed Mendelson. 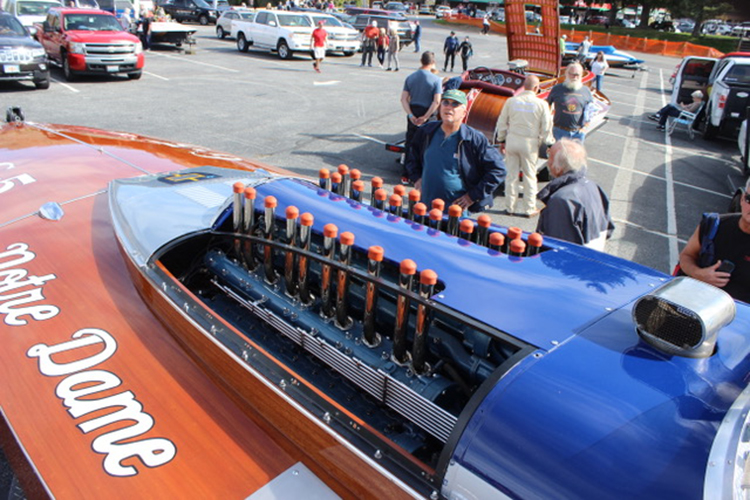 A look at the 24-cylinder Duesenberg engine.  Photo by Craig Fjarlie

The 24-cylinder Duesenberg engine was originally carbureted, with no supercharger. Later, Paul Miller, a mechanical expert who worked for General Motors, modified the engine and added a supercharger. At the time he made the conversion, he estimated the supercharged engine would produce 900 horsepower. Decades later, when the replica Notre Dame was nearing completion, the engine was put on a dynamometer and was found to produce just over 900 horsepower at 5,000 rpm.

During the Second World War, when racing was on hold, the third Notre Dame went into storage in Mt. Clemens, Michigan. Action on the water resumed in 1946, but Notre Dame remained in storage for another year. Dan Arena and his brother, Gene, brought their new boat, Miss Golden Gate III, to the ’46 Gold Cup in Detroit. Their boat was the first to be powered with a surplus Allison aircraft engine. Miss Golden Gate III finished third in the Gold Cup, but turned the fastest lap of the race. Al Fallon, of Detroit, bought the boat from Dan Arena. Fallon renamed it Miss Great Lakes, and Danny Foster drove it to victory in the President’s Cup.

The third Notre Dame returned to action in 1947. Mechanical problems prevented it from winning the Gold Cup, but Dan Arena drove it to victory in the Silver Cup on the Detroit River, and finished second in the President’s Cup. Following the season, Mendelson sold the boat to Warren Avis, of rental car fame, who drove the craft with a new name, Miss Frostie. The 1948 Gold Cup on the Detroit River was run under rough conditions and Avis finished only one heat. Later that season Miss Frostie finished third in the Silver Cup.

The former Notre Dame was idle in 1949, but returned to action in 1950, now owned by Joe Schoenith and sponsored by his company, W.D. Gale Electric. Joe’s son, Lee, was slated to drive. Before the season Gale was modified so that it could be powered by an Allison engine. “The boat was cut in half and extended to accommodate the Allison,” Dan Arena’s nephew, Dan, explains. The Duesenberg was pulled out and placed in safe storage. When the Allison was installed, Dan Arena remembers his father, Gene, riding in the boat with Lee Schoenith, teaching him how to drive it.

Gale entered the 1950 Gold Cup, but like other boats from the eastern United States, it was quickly outclassed by the new boat from Seattle, Slo-mo-shun IV. The last time Gale raced under Schoenith’s colors was 1951, when Al D’Eath drove it.

Schoenith parted company with the boat and it was campaigned by Frank “Bud” Saile in 1953 and ’54 as Miss Wayne, named for his Wayne Tool & Die Company. Joseph “Doc” Terry drove the boat to third place in the 1953 Silver Cup in Detroit, on the basis of finishing all of its heats. Saile sold the boat and in 1956 and 1957 it made a few appearances as Miss Ricochet, driven by Bob Sommerville. The craft sat out the 1958 season, but made a final appearance in 1959 with Bill Matthews in the cockpit.

The third Notre Dame went back to Schoenith’s shop, where it sat for years with several other retired boats. The Duesenberg engine was stored separately. It’s good that the engine was kept away from the boat, because some time in the 1960s, several of the retired hydroplanes were burned, including the former Notre Dame. “It was burned by mistake,” Dan Arena laments.

The way Arena describes it, the Duesenberg “sat around for years.” Finally it was picked up by a collector. Gerard Raney (no relation to Scott Raney who is a current owner of an Unlimited hydroplane) had raced cars and considered putting the Duesenberg in a race car. Alex Giamo, who had led Raney to the engine, researched the history of the Duesenberg and discovered the boat racing connection. Plans to put the engine in a race car were scrapped and it was decided to install it in a boat. The problem was, Notre Dame no longer existed. Raney made contact with Arena and in 1994, and construction was started on a replica. “It took 26 years to finish it,” the younger Dan Arena remembers. “We let Gerard take his time.” Throughout the construction of the replica, the diary that Dan Arena kept while building the original Notre Dame was carefully followed. As a result, the replica is virtually an exact copy of the original boat.

The Duesenberg engine was thoroughly overhauled and prepared to power the boat. The same type of spark plugs used in the engine when it raced were still available and installed in the engine.

The younger Dan Arena located Danny Foster, the son of Danny Foster, and brought him in to work on the replica. “I grew up with a love of boats,” Arena says. “Danny Foster, Jr., didn’t have much to do with his father.” Danny Foster, Sr., had divorced his wife and moved from the Bay Area of California to Detroit, so he would have a greater opportunity to drive hydroplanes. “Danny and I met when we were one year old,” Arena explains, “but I didn’t see him again for several decades.” Danny Foster, Jr., has been involved with the Notre Dame replica for about 20 years.

Shortly before the replica Notre Dame was set to go in the water in December, 2018, Gerard Raney died. His widow, Joyce Raney, and other members of the family, asked Dan Arena to watch over the boat. “I was close to the family,” Arena says. She told me, “I need you to take care of the boat.” Arena has possession of the boat, but it is still owned by the Raney family. It went to a few vintage events in 2019, including Mahogany and Merlot on Lake Chelan in Washington State.

At Chelan that year, Arena said he would like to take the boat to Detroit, the place where the original Notre Dame did most of its racing. Whether the boat runs again is up to the Raney family. Fans who have seen the replica and heard the engine are hopeful it will continue to participate at vintage events. One person, who was present at Chelan when the engine was started, made the remark, “Just hearing it made my whole trip worthwhile.” The engine has a unique sound, unlike the deep roar of the Rolls-Royce Merlin and Allison engines that powered Unlimited hydroplanes in the decades following World War II, yet deeper and more authoritative than the high-pitched sound of a supercharged automobile engine.

The third Notre Dame and its one-of-a-kind 24-cylinder Duesenberg engine, occupy a special place in the history of Gold Cup racing. One must hope more hydroplane historians will have an opportunity to appreciate the beautiful replica and its awesome engine. 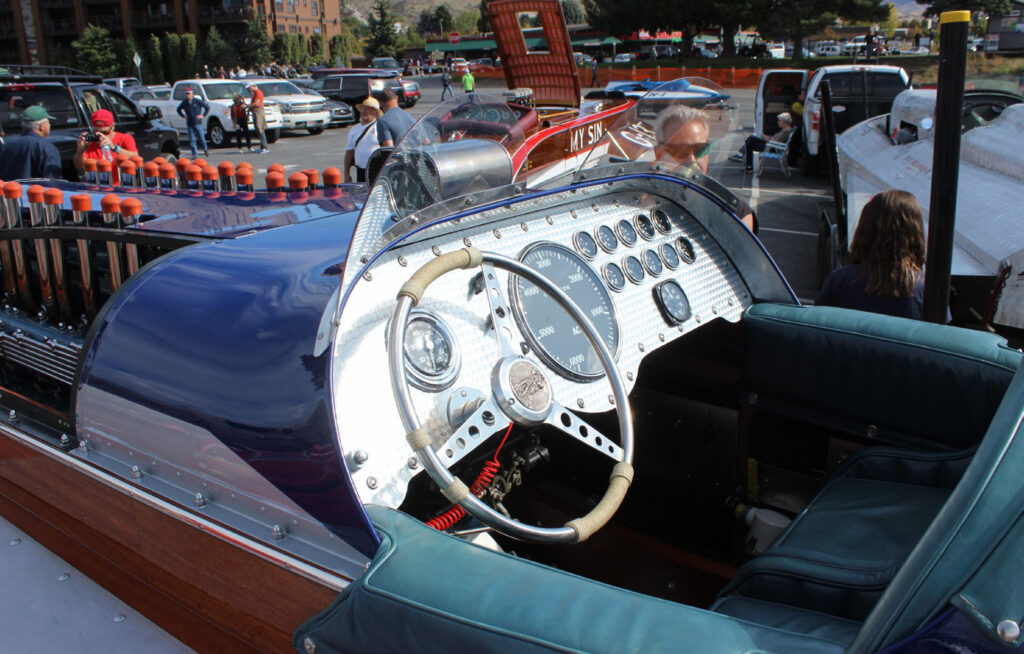 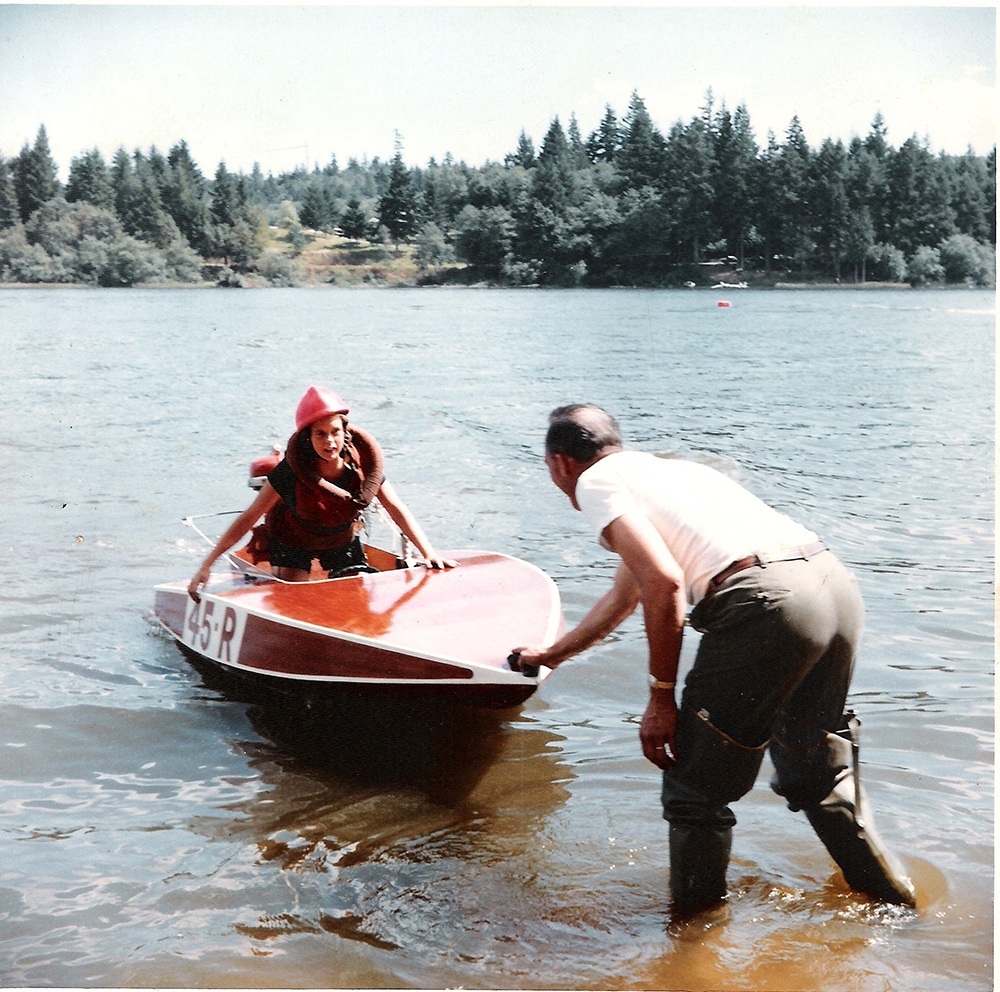 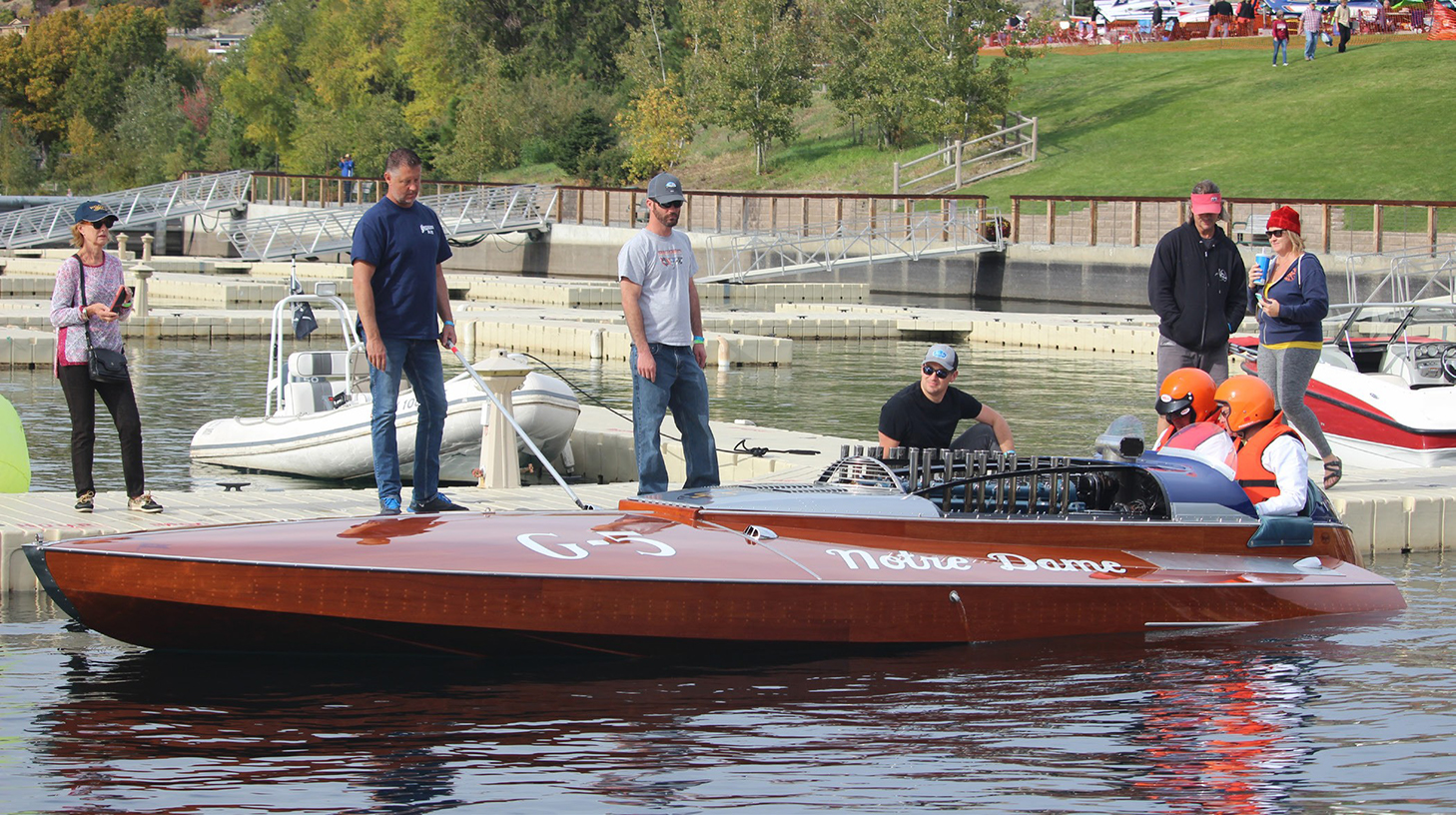